Let’s talk! Please fill out the form and we will get back to you within 1-2 business days. If you need a response sooner, give us a call at 207-200-7879. We appreciate the opportunity to work with you. 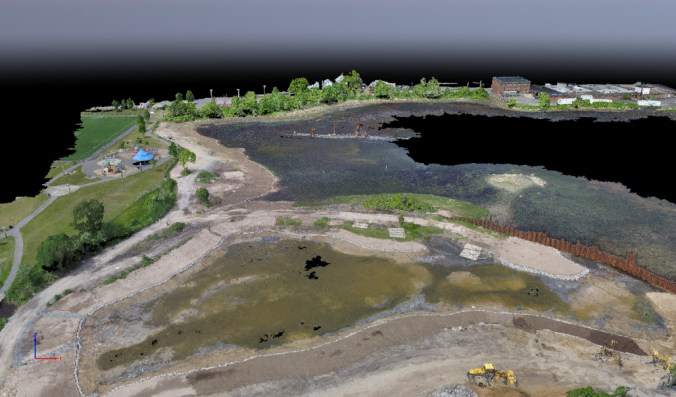 Liftoff! Nearview has successfully completed an UAS survey for Jacobs Engineering Group in response to a request for a survey demonstration at the New Bedford Superfund Site in New Bedford, Massachusetts. Jacobs is contracted by the U.S. Army Corps of Engineers (USACE) to perform remedial actions at the U.S. Environmental Protection Agency (EPA) managed New Bedford Harbor Superfund Site. These activities include excavation of impacted sediments within the intertidal and subtidal areas of New Bedford Harbor, and require surveying and monitoring to be conducted during remedial actions including pre-excavation, post-excavation and post-backfill activities.

The objective of this survey was to acquire drone-based photogrammetric data over several areas of interest, and to use the resulting point cloud topographic data and aerial imagery to create a variety of engineering data products needed to assess and plan for the ongoing remedial actions. By comparing this data to recently acquired land survey data, Jacobs was able to assess the accuracy, repeatability, and cost effectiveness of UAS photogrammetry for pre- and post-remediated areas.

Stefan Claesson of Nearview, with assistance from Andrew Kelly of Substructure, effectively acquired all photogrammetric data within a single low-tide period, and delivered a variety of survey-grade data products including 3D models, orthomosaics, and topographic point cloud data that exceeded USACE survey and engineering standards and project requirements. Notably, areas that required days to cover with traditional land survey methods, Nearview was able to survey over a period of hours by UAS, and at much greater point density and resolution. Jacobs engineers were able to confirm the accuracy of Nearview UAS survey data through comparisons to the previously acquired land survey data.

The ortho-imagery and resulting topographic data will be used by Jacobs to evaluate project progress, plan further actions, calculate the volume of remediated materials, and document surficial changes over the course of the project. The UAS methods were also noted by Jacobs as being advantageous in mapping the intertidal zone and wetlands, as well as areas inaccessible due to soft sediments and fragile ecosystems.

With its proven techniques and capabilities, Nearview is excited to be able to offer its expertise and services for complex engineering and soil remediation projects.

August 11, 2022 | by Stefan Claesson
Nearview is a leader in aerial drone remote sensing and analysis of the coastal environment. We are proud to announce that we have been selected as a NOAA SBIR Phase I grant recipient to develop an “AI Model for Automated Detection and Mapping of Intertidal
Read Full Post
View all posts